A2A at the Ambrosetti Forum. Comment of the CEO, Renato Mazzoncini, on the role of multiutilities

A2A's CEO Renato Mazzoncini spoke at the Ambrosetti Forum about the role of Multiutilities as an example of widespread and organised corporate social responsibility.
Below is his speech. 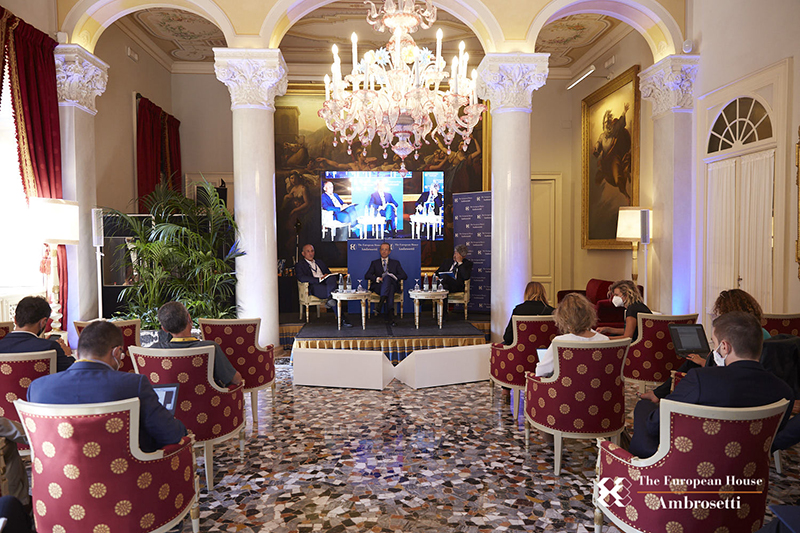 The historical period we are currently going through, recently also characterised by the serious Covid-19 health emergency, will surely be remembered for the incredible effort of the community towards a more sustainable economy aimed at safeguarding our planet.
In this context, multiutilities, by the very nature of their business, play a central role, overseeing the key dimensions of the sustainable transition process (e.g. renewable energy production and circular economy). These activities make a significant contribution to the achievement of 9 of the 17 Sustainable Development Goals (SDGs) introduced by the United Nations' 2030 Agenda.

Indeed, Multiutilities represent an example of widespread and organised corporate social responsibility: the provision of essential services, such as energy, water and waste management, makes them a strategic player in meeting the needs of citizens and local areas. Moreover, their governance, which in the case of the main Italian listed companies, in addition to a public majority, also has a private shareholding, generates a high level of accountability at all levels of their operations. This translates into a synergistic and constant relationship with citizens, policy makers and economic and financial operators.

In order to asses the role of multiutilities in the sustainable revival of Italy, The European House – Ambrosetti, in collaboration with A2A, has mapped the state of the art of the Italian regions, the existing gaps and how to bridge them in the three key areas of their work: energy, environment and water cycle. To achieve the decarbonisation targets, it is first and foremost necessary to increase the use of renewable energy sources.

The analyses of the study show that Italy, with the trend of the last 5 years, will not reach the final energy consumption targets set by the Integrated National Energy and Climate Plan (PNIEC) by 2030, with a gap of more than 7 percentage points. Increasing renewable installed power in electricity generation is essential to reach the target, but Italy is still proceeding too slowly: at current rates, the installed power gap will be approx. 2,200 MW by 2025 and approx. 2,400 MW by 2030 for wind power and as much as 3,700 MW by 2025 and over 23,000 MW by 2030 for photovoltaic systems. This delay is due to long and complex authorisation procedures. Utility scale installations have to request the single authorisation which, in certain practical cases, has taken up to 8 years: it is necessary to speed up the process as much as possible.

Important developments for the sustainable transition of Italy are coming from the Circular Economy Package of the European Commission, which requires preference to be given to forms of waste management aimed at the recovery of material and use of residual waste as energy, while minimising the use of landfills. However, while the most virtuous European countries have almost eliminated the use of landfills (e.g. Sweden and Finland 0.7%, Germany 0.8%, Belgium 1%), Italy is still far from the binding 10% target set by the Circular Economy Package for 2035, with 21.5% of municipal waste going to landfills. Also in this case, Italy is suffering from a significant gap in installations: the landfill capacity of many regions is running out and 13 out of 20 regions will already saturate disposal capacity by 2020: 2.2 million tonnes of waste will exceed current capacity at the end of the year, at great cost to the regions. 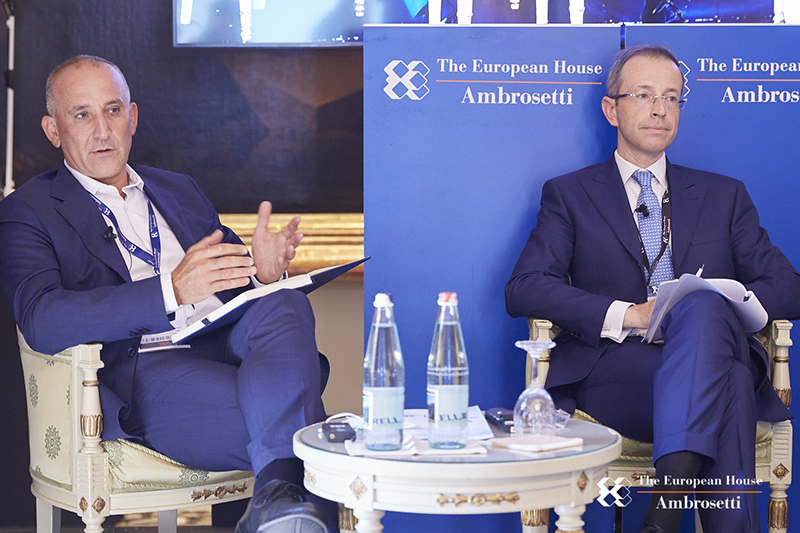 Installation gaps and significant regional variations also characterise the third pillar of the study, the water cycle. Italy has obsolete water infrastructures (60% of the infrastructures are more than 30 years old and 25% more than 50 years old) and half of the water distributed is lost (47.9%, compared to a European average of 23%), with a very heterogeneous situation among the different regions. The country also has a variegated situation with regard to the capacity to purify and treat wastewater, with an average Italian coverage of 85%, which is further reduced if the treated load is analysed, reaching 78.5% at the Italian level, with negative peaks of 68.9%. For this reason, Italy is subject to 4 infringement proceedings, with 2 confirmed rulings. Moreover, these infringements are the result of violations for different types of installations and therefore each of them is linked to several hundred non-compliant installations. Urgent action is needed to resolve this situation.

Overall, the study estimates that Italy will have to pay a total of no less than €500 million for the entire period of non-compliance since the ruling was issued (between 2018 and 2024). Although there has been an improvement in recent years, with 40 Euros per inhabitant per year (compared to an annual European average of 100 Euros per inhabitant), Italy is at the bottom of the European ranking for investments in the water sector, ahead only of Malta and Romania. Moreover, the current level of the tariff (1.87 Euros/m3, half that of France and 40% of Germany) makes it impossible to bridge the infrastructure gap and promote virtuous behaviour. To give a sense of the real cost of mains water, suffice it to say that a tariff of 1.87 Euros/m3 is equivalent to paying 1.87 Euros for a total of 2,000 half-litre bottles of water (which, on average, would cost approx. 1 Euro each, for a total of 2,000 Euros). Analyzing the ratio between tariff, household expenditure and investments, the consultants of The European House - Ambrosetti have estimated that a tariff increase of 0.10 Euros/m3 would be associated an increase in investments of 20 million Euros and approx. 1,200 new jobs.

In all areas covered by the study, Italy has a significant gap with European countries that needs to be urgently bridged, combined with a heterogeneous picture at the regional level. The country has a lot of energy and has always given its best in times of difficulty: it's now time for Italy, and it's now time to unleash the energy of the Italian regions in order to make its sustainable revival possible. 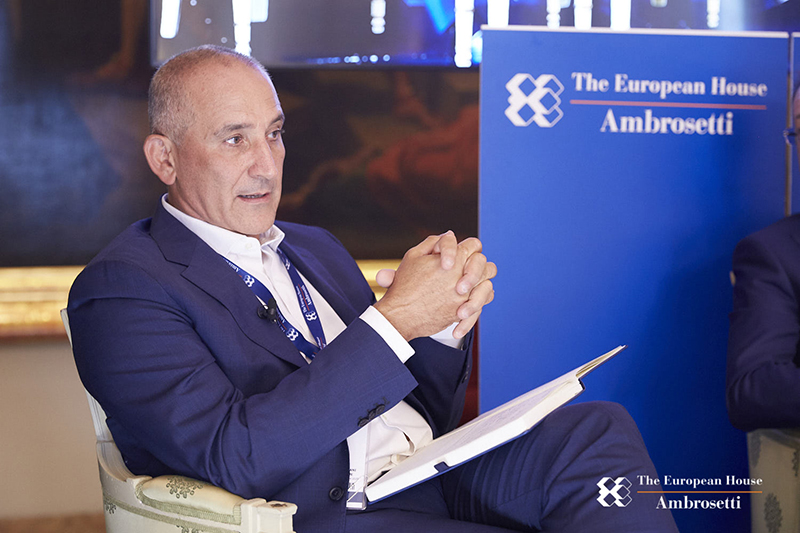 Multiutilities, with their regional dimension, are ready to play a leading role and act as a catalyst for European investment. In order for this to be possible, however, it is necessary to overcome the well-known "NIMBY" ("Not In My Backyard") syndrome by playing, we too at A2A, a proactive role with the Institutions, Associations, social and trade union forces and politics, in listening to the requests of the regions and building transparent pacts for the construction of safe and efficient infrastructures which are necessary for the country and for the quality of life of our communities. A2A will play its part, contributing its share of the funds and acting as a booster of other people's investments.
Covid-19 has shown us the importance of caring for the environment around us and this renewed sensitivity must not be lost. Suffice it to say that today we have 0.1 gigawatts of photovoltaic systems, in 2030 we will have 1.5. But we are still using coal. We must speed up the farewell to fossil fuels and create a real environmental breakthrough. To to this, A2A intends to be the promoter of new innovative and essential projects for the country to be proposed to all stakeholders in question, also to facilitate the transposition of funds made available, for example, by Green Deal Europeo and by the Next Generation EU mechanism.

At the same time, it is important that citizens also take an active part and learn to use the regulatory and fiscal effort that has been made, also recently, to support sustainable development, which will increasingly require us to pay attention to the environment and the local area.  The road to take is clear, now we just need to go down it, as companies and as citizens.

The road to take is clear, now we just need to go down it, as companies and as citizens.

I believe that in a national and European context characterized by major differences in the management of services with a high impact on people’s quality of life, multi-utility is becoming increasingly crucial. Our Group can therefore play a very important role at national level: we will present the new Industrial Plan in a few months. It will be our first ten-year Plan and our ambition is to promote sustainable transition with major investments in strategic infrastructure for the country’s growth.