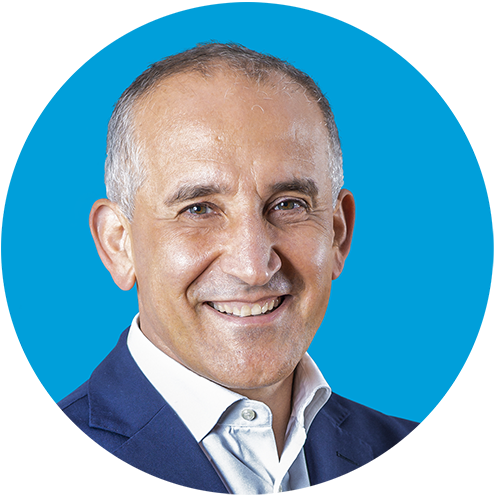 Renato Mazzoncini has been Managing Director and Chief Executive of A2A since May 2020.
Electronic engineer and professor at the Politecnico di Milano scientific-technical university, where he teaches the Mobility - Infrastructures and Services course and is also a member of the Advisory Board.

His professional career has seen him at the head of a number of leading companies in sectors of strategic national importance. He started work at Ansaldo, then moving on to head private, public and semi private company, as well as local public services, before joining Gruppo Ferrovie dello Stato (Gruppo FS) in 2012 as Managing Director of its Busitalia subsidiary.
From 2015 to 2018, he held the position of Managing Director and Chief Executive of Gruppo FS, during which time ANAS was integrated into the Group. An enthusiast and expert in the sphere of environmental issues, the green economy and climate change, he worked with international experts on RoadMap to 2050. A Manual for Nations to Decarbonize by Mid Century, presented at the COP 25 conference.
He also contributed as an author to Green Planning for Cities and Communities, a book dealing with various issues relating to the development and planning of smart and green cities. He currently holds the position of Vice President of Elettricità Futura and is a member of its Executive Board and General Council. In November 2020, he was elected to the General Council of Confindustria Brescia. He is also a member of Utilitalia’s Listed Companies Committee and of the Founders’ Assembly of the Fondazione Politecnico di Milano.

Between 2017 and 2018, after one year as a Deputy Chairman, took on the role of Chairman for UIC, the International Union of Railways, an association of 200 railway companies hailing from 100 different countries