What is the manufacturing capital for A2A?

In 2019, the investment plan dedicated to making its plants and networks increasingly efficient continued. The Environment BU continued to strengthen the material recovery chain: start-up of the new plastic selection plant in Muggiano (Milan), with a capacity of 45,000 tonnes/year, equivalent to the needs of the Municipality of Milan and the surrounding areas; and was obtained the authorization to build the first plant producing biomethane from waste at Lacchiarella, in the area of the Cascina Maggiore. This plant can treat up to 100 thousand tonnes per year, producing about 8 million cubic meters of biomethane and 20 thousand tonnes of compost.

The Generation BU signed an agreement in 2019 with the Talesun group that provides for the acquisition of a pipeline for the development of green field photovoltaic projects for a total capacity of around 1 GW. In addition, in the first half of 2019, were completed the flexibility works at the Cassano power plant to improve the performance and production management of the plant, while reducing NOx stack emissions.

The Networks and District Heating BU, finally, carried out the plan of work on the water network to reduce losses, replacing 36 km, introducing new technologies for repairing pipes and installing new-generation detection devices. At the same time, has defined a plan of interventions on the Milanese electricity network, replacing 100 km per year of medium voltage grid and 20 km per year of low voltage grid, in order to ensure the efficiency and resilience over time, reduce CO2 emissions, improve service quality and reduce network losses. In addition, launched its 2G smart metering system.  The plan to replace 1.3 million electricity meters in the municipalities served by Unareti will start in 2020, with an investment of about 173 million euro.

Net electricity produced divided up according to plant type and source 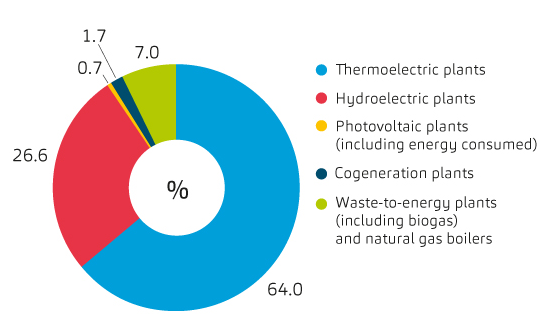 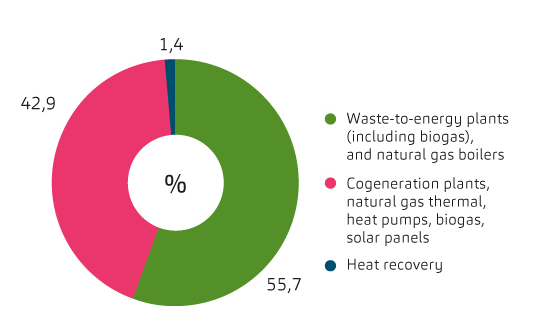 million tonnes/year
Material treatment and recovery capacity of the Group

In 2019, the new Nuvolera purifier came into operation, serving about 25,000 equivalent inhabitants and connected to the sewer network of 5 surrounding municipalities. The start-up of the new purifier will allow a decisive improvement in the quality characteristics of the Naviglio Grande Bresciano, the receiving watercourse of the new purified waste water that until now has received a slurry that has only undergone physical pre-treatment.

The year 2019 also saw the partial collection of the sewerage network of the Municipality of Concesio to the network of Brescia, served by the Purifier of Verziano, with access to the purification service of about 4,500 new equivalent inhabitants.

At an advanced stage, with completion of the works expected in August 2020, is also the construction of a new purifier in the Municipality of San Paolo in Brescia, capable of serving 6,000 equivalent inhabitants.

In January 2019, work began on the construction of the sewerage and water supply system for the Calvisano agglomeration, which by the end of the year, had reached 50% progress.

The total planned Capex amount to approximately 72 million euro and are expected to last until 2023.

In 2019, the decarbonization process began, which will lead, through a demanding investment plan of 70 million euro, to gradually replace the heat currently produced by the Lamarmora power plant from fossil fuels (coal and gas) with greener sources and to improve overall environmental performance.

The plan, which will be developed over a four-year period, will save 15,000 toe (tonnes of oil equivalent) per year, and further reduce emissions of pollutants compared to the current set-up: -50% for nitrogen oxides, -40% for dust and -90% for sulphur oxides.

In 2019, the plan reached a first important milestone: the construction of a new thermal storage tank at the Lamarmora power plant. The storage tank has a volume of 5,200 m3, a diameter of 20 metres and a height of 20 metres. It can contain water up to 97°C at atmospheric pressure. This type of device will play a key role in the decarbonization plan. In fact, since the heat demand of users is much lower at night, the system is usually forced to disperse waste heat during the night and to cover the peaks of daytime demand with all available heat sources, including large gas boilers.

To explore other resources

Back to the framework