The publication of the sustainability report for the A2A group represents an expected annual appointment, which allows us to get in touch with our stakeholders, analyze and recount the commitment and attention we dedicate to issues related to economic, environmental and social sustainability. This document, which since last year has also been the consolidated non-financial statement of the Group pursuant to Legislative Decree 254/16 (NFD), has taken on various forms and names, but continues to be drawn up according to rigorous and internationally shared standards and methodologies, in particular the Integrated Reporting Framework and the International Standards of the Global Reporting Initiative.

The report this year includes, in an initial section and in its Supplement, also the results and activities of the ACSM-AGAM group, formed in July 2018, following an aggregation project that includes the main Lombard public utilities (ACSM- AGAM S.p.A., ASPEM S.p.A., AEVV S.p.A., AEVV Energie S.r.l., Lario Reti Holding S.p.A., Acel Service S.r.l., Lario Reti Gas S.r.l. and A2A S.p.A.), with the aim of making optimal use, through the “Multiutility of Territories” model, of the wealth of skills and deep roots in the local community.

Also this year, our commitments and improvement actions have been defined in the Sustainability Plan, updated with the new time horizon 2019-2023 and integrated into the Group’s Business Plan. The document is based on the four pillars of our 2030 Sustainability Policy, which refers to the 2030 Agenda
of the UN, consisting of 17 objectives (Sustainable Development Goals - SDGs).

We want the document to remain a privileged opportunity for dialogue, challenging ourselves and looking to the future, starting from today's clear vision. 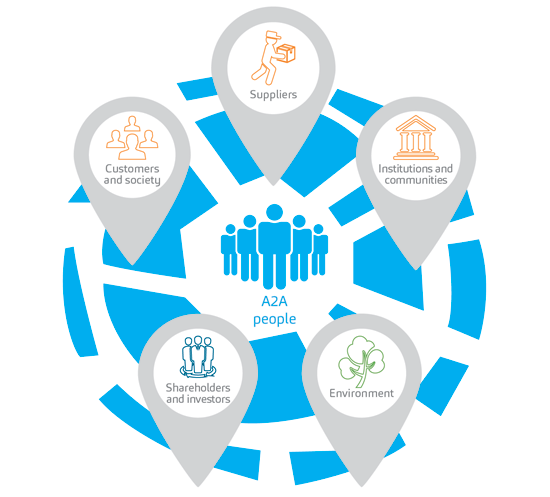 By materiality we mean the relevance of a theme for an organisation and its stakeholders.

Listening to the needs of the community and responding to their needs and expectations is the basis for realizing the concept of sustainability. The aim is to generate and distribute value in a harmonious and lasting way, reconciling the interests of the Group and its stakeholders. A2A has identified its main stakeholder categories, for which it is interesting to note that the main stakeholders often assume a dual role, for example: the Municipalities in which the Group operates also act as shareholders; the institutions it faces are also customers; citizens (and therefore communities), in turn, represent the greatest service users; within the category of customers are also employees and suppliers.

To measure the importance for stakeholders, the assessments were considered as emerging from:
a survey carried out by Ipsos which involved citizens, customers, suppliers, institutions, the media, political movements, environmental associations, trade associations and consumer associations;
an online questionnaire given to employees with positions of responsibility between November and December 2018 (about 500 respondents out of 1,100 sent);
the evidence that emerged from the forumAscolto in the territories;
the analysis of the database of the engagement initiatives carried out during the year.

To measure the importance for A2A, an online questionnaire was sent to the first lines of the company. The results of the analysis were then presented to the Sustainability and Territory Committee and approved at the meeting of the A2A Board of Directors on December 20, 2018, which approved the matrix.

The analysis has therefore allowed stakeholders and top management to assess, on a scale from 1 to 5 (where 1 identifies a topic as irrelevant and 5 as strategic), 21 issues that embrace the 6 Capitals and the Group's governance system.

Between the end of 2017 and during 2018, two new stages were added to the forumAscolto programme, created in 2015 to consolidate the Group's ties with the communities in which it operates and to actively involve stakeholders in the generation of ideas to be implemented in the area, and which over time has touched the realities of Brescia, Bergamo, Valtellina- Valchiavenna and Milan:

In addition to financial support, these entrepreneurial ideas were guaranteed a light incubation path for the development of the project, which ended in December
2018.

At the same time, work continued on the realization of projects selected after the Milan forum, held in January 2017. In particular:

The reporting of the forum and the Group’s performance in the economic, environmental and social sphere takes place through Local Sustainability Reports, which are implemented after each forum and updated annually, and through the platform www.forumascoltoa2a.eu. To date, the Territorial Sustainability Reports prepared
are those of Brescia, Valtellina-Valchiavenna, Bergamo, Milan, Friuli Venezia Giulia and Piedmont. The 2017 editions contain a significant addition, i.e. a description of the contribution to the achievement of the UN sustainable development objectives specific to the territory and, to make the report even more effective and immediately understandable, a different formula has been adopted than in the past, focusing on the web.

Go to archive (ITALIAN VERSION ONLY)